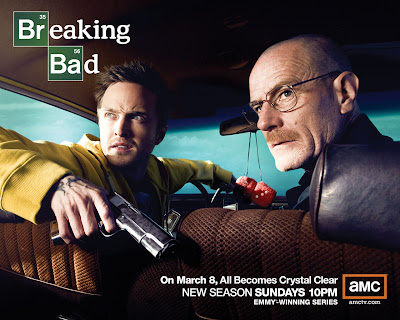 "Breaking Bad is an American television drama series created and produced by Vince Gilligan. The series is broadcast in the United States and Canada on the cable network AMC. It premiered on January 20, 2008, and completed its first seven-episode season on March 9, 2008. The show's 13-episode second season premiered on March 8, 2009. A third season was announced in April 2009.

Set and produced in Albuquerque, New Mexico, Breaking Bad revolves around Walter White (Bryan Cranston), a struggling high school chemistry teacher with a teenage son who has cerebral palsy (RJ Mitte), and a pregnant wife, Skyler (Anna Gunn). When the already tense White is diagnosed with terminal lung cancer, he breaks down and turns to a life of crime, and starts producing and selling methamphetamine with his former student Jesse Pinkman (Aaron Paul) in a desire to secure his family's financial future.

Breaking Bad has received widespread critical acclaim, particularly for its writing and Cranston's performance on the show, and won two Emmy Awards for its first season in addition to numerous other awards and nominations..." wiki

A struggling chemistry teacher will soon turn to a life of crime. Watch the opening scene of the series premiere." click youtube